Residents could be moving into the former Penthouse Furniture building in downtown Winnipeg as early as this fall, officials say. 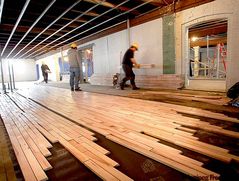 The $10.5-million conversion of the six-storey warehouse/retail building into a 60-unit condominium complex is in full swing. A spokesman for the developer, Alberta-based Taurean Global Properties, said the company hopes to complete work by August or September.

Facts about The Penthouse Condominiums project

The six-storey structure was built in 1903 and was originally known as the Campbell Brothers & Wilson Warehouse.

The building was granted Grade 2 heritage status in 1982, partly because of its Romanesque and Chicago-skyscraper design.

By the time the conversion project is complete, the building will have a new roof, new mechanical systems (heating, air conditioning, plumbing and electrical) and two new elevators. However, most of the interior brick walls and hardwood floors are being retained, and the wooden beams and support columns will be exposed to give the units a "loft-style" look.

Additional amenities will include personal lockers and an exercise room/gym.

Kerry Philpott, Taurean's vice-president of business development, said slightly more than half the one- and two-bedroom units have been sold and he doesn't expect any difficulty selling the rest.

"We're extremely happy with that (the pace at which units have been selling)."

Philpott said Taurean decided to keep the main floor, about 12,000 square feet, as retail space. He said it's already been leased to Interior Illusions, a local furniture store.

Thiessen, of RE/MAX Professional Realty, said the goal was to make the units affordable for as many types of buyers as possible. To do that, the developer had to keep most of the condos at about 800 square feet.

"I think the days of the affordable 1,000-square-foot unit are gone," Thiessen said. "In Vancouver and Toronto, the average new condo is about 700 square feet, so 700 to 800 will be the new average here, too."

He said buyers so far have been evenly divided between two groups -- singles or couples in their 20s and 30s who are keen to live in the Exchange District, and 50-plus empty-nesters looking for a lifestyle change.

He said many Winnipeggers in their 50s can remember when most of the city's movie theatres and nightlife were still downtown.

"They have fond memories of the downtown (when they were) growing up, so they feel they're still connected to the downtown."

He said the pace at which the units are selling -- he's been marketing them since May -- is a little faster than normal.

Jilmark Construction is the general contractor for the conversion, and company president John Froese said it's presenting some challenges.

One of the biggest was removing the old elevators and creating shafts for the new ones. That involved removing some support columns and footings and pouring new ones without undermining the stability of the structure.

"It's been a good, fun challenge," Froese said.

Philpott said the positioning of the support columns prevents Jilmark from converting the basement into parking stalls, so Taurean is arranging for off-site parking.

He said the company is negotiating with the owner of a vacant lot across the street on Bannatyne Avenue, who is considering building a parkade on the site. It's also thinking of offering a concierge service for the building's residents.

"It may end up being a combination of both," Philpott said. "But there will definitely be parking close to the building."

Taurean bought the building in 2009 from the owners of the former Penthouse Furniture store, which closed after its parent company, North End Furniture Co., or NEFCO, went bankrupt.

Taurean originally wanted to convert the heritage building into affordable apartments, but determined condos would be more economically feasible. To help offset the high cost of converting a heritage warehouse building into a residential complex, Taurean received an estimated $1.45-million grant from the city and province under their downtown residential development grant program. The $20-million program, launched last year, is almost fully subscribed. It provides grants to developers who build or renovate new residential buildings downtown.

Some other projects that will get funding are the Qualico Group's conversion of seven East Exchange District warehouses into 150 residential units, and Mark and Rick Hofers' conversion of the Avenue and Hample buildings on Portage Avenue into a residential/commercial complex that includes 72 one- and two-bedroom apartments.

This entry was posted on February 8th, 2011 | Posted in General