In this day and age of inflated home prices, first-time buyers and seniors often find it difficult to find a solid, affordable place to live.

That can especially be the case in the northeast sector of the city, where housing and condominium developments aren't going up at the same rate as in the city's south end.

Thankfully, one developer -- M2 Engineering & Consulting -- noticed the lack of new housing and has moved to do something about it.

"The head of M2, Michael Mark, has worked as an engineer in Winnipeg on hundreds of projects," says RE/MAX Performance Realty's Bill Thiessen. "He eventually decided to do developments himself. When he saw the site that an old Mac's (convenience store) location on Wayoata Street (in Transcona) offered, he jumped at the opportunity."

What Mark came up with is a 24-suite, two-storey condominium complex -- to be known as Transcona East Village -- that will feature a concrete foundation, wood-frame construction, stucco and siding exterior and tar and gravel roof. The reason for that is simple, says Thiessen.

"The question we asked ourselves is, 'what do people in Transcona want in a housing development?'. The immediate answer was value, something that Transcona residents have always appreciated," he says. "Going the wood-frame construction route allows construction costs to be kept down, yet structural integrity and sound proofing isn't sacrificed. Most importantly, the units will be priced from $157,900 to $159,900."

All units will be 800 sq. ft. in size and open-concept in their design. Although construction is just underway at the 670 Wayoata Street site, a show suite is available to view at unit 7, 100 Bismarck Street (at Pandora Avenue West) just minutes away.

Any fears that the suite will be undersized are allayed the moment you walk in. A separate entrance borders on a stairwell that takes you up to the main level, which is essentially divided into two distinct quadrants. On one side is the kitchen, dining area and living room; on the other, the two bedrooms (or den), four-piece bathroom and loads of closet space.

"Overall, the building and all the units have been designed in mind for folks who want convenience, quality and minimal maintenance in their next home," Thiessen explains. "There are two models to choose from -- a one-bedroom plus den, and two-bedroom. There will be wall-to-wall carpeting in the bedrooms and low-maintenance vinyl flooring in the kitchen."

Because there's virtually no hallway in the suites, all the available space has been well-used. This becomes particularly apparent in the kitchen, where there's actually room to place a good-sized table and chairs between the kitchen and living room. That's a welcome feature; in some ergonomically-challenged suites, it can be tough to position a table without it interrupting flow.

"Actually, there's so much space that you could even think about an island in the middle," he adds. "It's nice to have that option -- to keep the area open for a table, or to be able to put in an island."

Due to double sliding doors that lead to a four-by-twelve balcony, the living room is not only bright, but surprisingly large, with plenty of room for furniture and a big screen TV. Carpet is a high-quality grey berber.

"The idea was to equip the suites with nice finishes -- maple cabinets, vinyl flooring, berber carpeting -- that looked good and wore well, yet kept costs down," Thiessen says. "If you decide you want granite and hardwoods, those options can be added."

The suite's other half then transitions neatly into an area with the master bedroom at one end, four-piece bath in the centre, and den/bedroom at the other. It's a segmented design that works very well.

"It's an efficient, low-maintenance design that makes total sense," he says. "People also love the location -- it's right across from Safeway, and close to other amenities such as a bank, liquor store, dollar store, video store and bus service. From top to bottom, it's a well-done project. Everything is going to last, and will look good in 10 years. For folks who love Transcona, the location -- and affordability -- can't be beat." 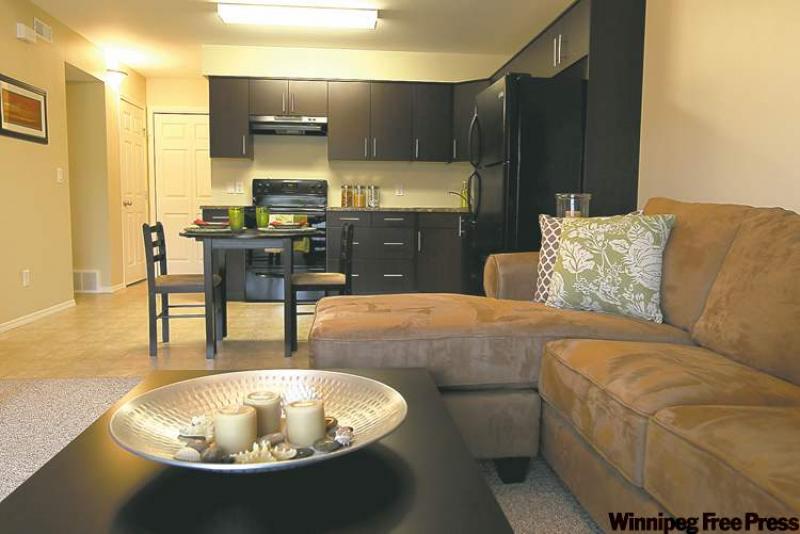 This entry was posted on September 19th, 2010 | Posted in General